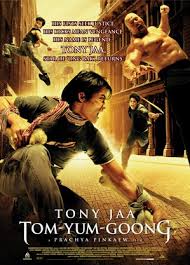 Kham is the last of a family line of guards who once watched over the King of Thailand's war elephants. He grows up forming close relations to his elephant, Por Yai and his calf, Kohrn. During Songkran festival, the elephants are stolen with help from Mr. Suthep, a local MP and his son who are collaborating with elephant poachers. Kham discovers that they are in the hands of Johnny, a Vietnamese gangster who runs a Thai restaurant named Tom Yum Goong Otob in Sydney, Australia.


Kham arrives in Sydney, and is stalked by the police as soon as he leaves the airport. He is eventually caught by Inspector Vincent and driven away in Mark's car. When the car stops outside Tom Yum Goong Otob, Kham sees Johnny leaving. He escapes and finds Johnny talking to Pla, a prostitute. Kham follows a minion as he jumps off a bridge. He takes that gangster out and manages to coerce another to lead him to Johnny's hideout, interrupting a drug deal. Outraged, Johnny summons countless extreme sports enthusiasts, who arrive to fight Kham. Kham defeats them one by one, and finally faces a quad bike rider, whom he takes down as well.

Exhausted, Kham falls asleep in an alley. Pla brings him to her apartment. In his sleep, he dreams of an epic battle involving war elephants and the Jaturangkabart, the elephant protectors. When Pla leaves, Kham wakes up to the sound of police sirens, and climbs down a pipe to make his escape.

Mark and Rick are taken off the case and re-assigned to provide security for the Police Commissioner's meeting with Mr. Sim. In that meeting, Pla acted as a hostess girl to the two men. During the meeting, Mr. Sim and the Commissioner are murdered. The murder is instigated by Vincent, who kills Rick and puts the blame on Mark. Mark escapes, but is later captured. Pla manages to escape, taking a camera phone that contains evidence of the murder with her. She is saved from the police by Kham. Pla reveals that she used to be a waitress at Tom Yum Goong Otob. Since Johnny and his men took over the management, it has been awful for all those who work there. She reveals a secret VIP area in the back of the restaurant.

With Pla's help, Kham enters Tom Yum Goong Otob. He fights his way into the VIP area and reaches the dining hall at the top. Kham demands, "Where are my elephants?" and is met with the laughter of Johnny and his men. Johnny taunts Kham with Kohrn's bell. This enrages Kham and he fights and defeats his opponents. He enters the storage area, containing various exotic animals ready to be butchered and eaten. Kham finds and frees Mark and Kohrn, escaping minutes before the police arrive. Meanwhile, Madame Rose is made the new leader of the Chinese gang after she murders two other possible successors.

Inspector Vincent initiates a search for Kham and Mark, who are hiding in a Buddhist monastery. Soon after their departure, the monastery is set on fire. But then Kham returns, and he defeats a fierce Capoeira fighter and a Wushu sword fighter. However, his third opponent, a giant wrestler, proves way too much for Kham. When the police arrive, he flees with Mark. By morning, Kham goes on his way. Mark is discovered by several policemen and sent to deal with Inspector Vincent, whom Pla has revealed to be the murderer.

Kham arrives at a conference hall where Madame Rose is having a press conference. Kohrn runs in, scaring off everyone while Kham engages the gangsters. He later finds Kohrn in an elevator lobby, where Vincent threatens to shoot him. Mark suddenly arrives on the floor in an elevator and disarms Vincent, killing his men. He beats Vincent up while insulting him. Suddenly, Johnny enters and kills Vincent, telling Mark that he has come to settle the score before leaving.

Kham finds himself with Kohrn in a huge room, and he is shown the skeleton of Por Yai, encrusted with jewels as a gift to Madame Rose. Her men then attack Kham, and he attacks them more brutally than previously seen, by breaking many of the men's arms and legs. The wrestler from the monastery is called in, along with three others. Kohrn is thrown through a glass wall, and Kham is knocked into the elephant ornament, causing two leg bones to fall off. Kham ties them around his arms and uses them as clubs to knock the wrestlers out. The two bones then splinter into two sharp fragments. Remembering something his father told him, Kham uses the splinters to sever the tendons of the wrestlers, who fall quickly. He stops Madame Rose before she can escape in a helicopter, and the two crash through the roof and land in the room. Madame Rose is knocked unconscious, while Kham's fall is cushioned by the tusks of Por Yai.

Back in the lobby, Mark is shown Pla, and forgiven by his boss, Inspector Lamond. He is given a new partner who speaks Thai. Mark is then interviewed by a reporter about Kham. Finally, a narration from Mark is heard, with scenes of Kham's childhood shown. Mark explains that Thai people treat elephants like they are their brothers, and they hate people who hurt them. Thais love peace, but dislike people who take liberties. Kham is finally reunited with Kohrn.
4 comments: Pautan pada catatan ini
Email ThisBlogThis!Share to TwitterShare to FacebookShare to Pinterest
Perihal CITER MESTI TENGOK
Newer Posts Older Posts Home
Subscribe to: Posts (Atom)